You are provided with the following

- A converging lens on a lens holder.

- A retort stand boss and clamp

Proceed as follows;
a) Find an approximate value of the focal length f of the converging lens supplied.

Explain briefly how the value of f was obtained

b) Arrange the apparatus as shown below

You are provided with the following;

- A retort stand, boss and clamp.

- A large beaker containing some water

- A tripod stand and wire gauze

- A cardboard with a hole in the middle

- A stop watch
Proceed as follows;
a) Set up the apparatus as shown below. 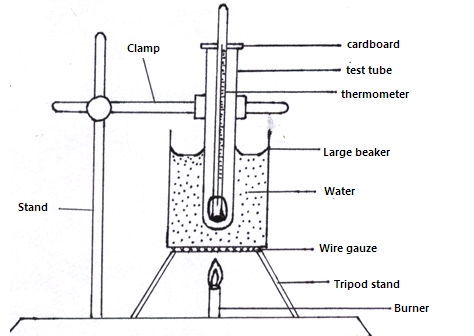 l c) Wrap the given piece of duplicating paper round the bulb of the thermometer. Use rubber band to hold the paper in place.

d) Place the thermometer inside in the dry test tube.

f) Remove the thermometer and immediately start the stop watch.

i) Repeat procedure (f) and (g) and record the reading T2 of the thermometer in the table at half minute intervals for 5minutes. j) Using the same axes on the grid provided, plot a graph of temperature (y-axis) against time for result obtained in (g) and (i) (label the graph T1 and T2)
Graph
k) From the graphs determine; i. For each graph the time for temperature to fall from 600C

ii. Find the ratio of the two times in k (i) above