ii) Write the thermochemical equation for the combustion of ethane. {1 mark}

iii) Draw the energy level diagram showing the combustion of one mole of ethane. {2 marks}

b) Changes of state are either exothermic or endothermic. Name a change of state that is: {1 mark}
i) exothermic

Study the flow chart below and answer the questions that follow. 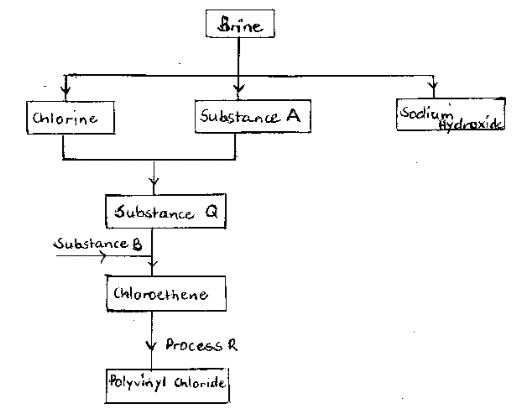 b) Write the equation for the reaction that produces substance A. {1 mark}

c) i) Name two substances which are used in the laboratory preparation of substance B.
{1 mark}

ii) Write the equation for the reaction that takes place in (i) above. {1 mark}

(a) The first, second and third ionization energies for the elements B and C are given below.

i) What is first ionization energy? {1 mark}

ii) Apart from decrease in energy levels, explain the difference between the first and second
ionization energies. {1 mark}

iii) Calculate the energy for the process

b) Complete the table below to show the number of sub-atomic particles in the given nuclides. A and B are not the actual symbols of the elements.

In an experiment, a student measured the amount of gas produced with time when excess 1.0 M hydrochloric acid was reacted with 0.42 g of a carbonate, XCO3 and obtained the following results. 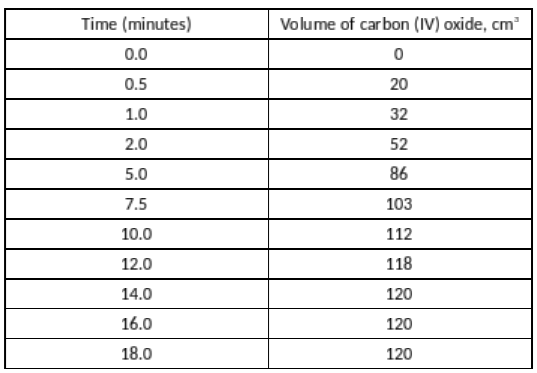 (Note: The reaction was carried out at room temperature)

a) On the graph paper provided, draw a graph of volume of carbon (IV) oxide against time. {3 marks}
b) From the graph,
i) determine the time at which half the original mass of marble chips will have reacted.
{1 mark}

ii) determine the reaction rate between the 5th and 6th minutes. {2 marks}

c) i) Write the equation for the reaction that takes place. {1 mark}

d) On the same graph paper, draw a sketch of the curve that would be obtained if 0.5 M hydrochloric acid was used. Label the curve A. {1 mark}

The flow chart below shows some reactions starting with copper (II) carbonate. Study it and answer the questions that follow. 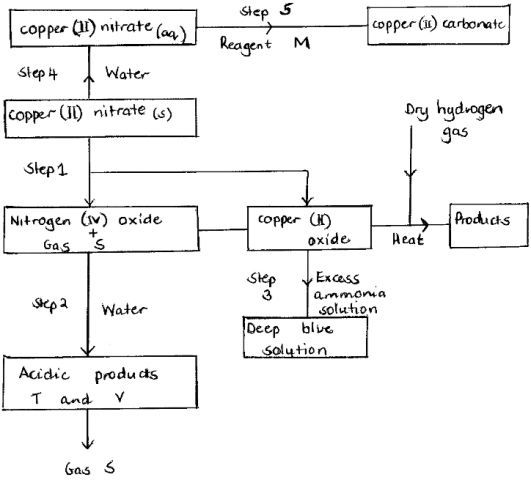 iii) Write the formula of the complex ion formed in step 3. {3 marks}

b) The diagram below is a flow chart for the extraction of copper. Study it and answer the questions that follow. 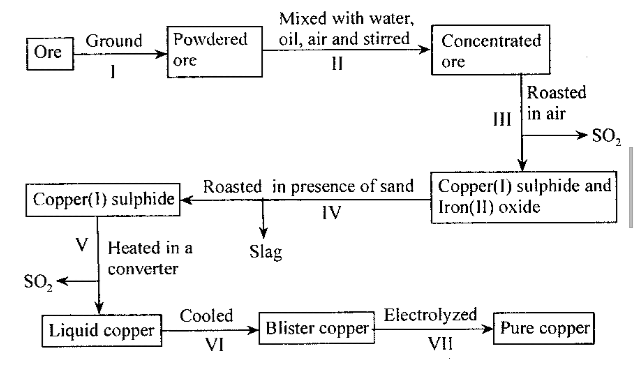 i) State the name of the process carried out in step II. {1 mark}

ii) Write the formula of the cation present in the slag. {1 mark}

iii) Write the equation for the reaction that takes place in step III. {1 mark}

iv) Blister copper is not pure and is refined by electrolysis. Draw a well labeled diagram to show
how it is refined. {3 marks}

v) During electrolysis of blister copper, contaminating metals such as zinc and ion also go into
solution as ions. Give one reason why these ions are not discharged at the cathode.
{1 mark}

Use the standard electrode potentials given below to answer the questions that follow.

a) i) Select two half cells which when combined give the lowest electromotive force. {1 mark}

ii) Write the cell representation for the cell in (i) above. {1 mark}

iii) Calculate the e.m.f of the cell obtained by combining the two half cells. {1 mark}
b) Identify the strongest oxidizing agent. {1 mark}

c) A cell was set up using zinc and lead electrodes as shown in the diagram below.

i) Write the equations for the reactions that occur at the half cells. {2 marks}
Zinc half cell

iv) The salt bridge is made of potassium nitrate or sodium nitrate solution. Give a reason for
this. {1 mark}

d) An iron cup was electroplated using chromium. The iron cup was thoroughly cleaned and weighed before dipping it into the electrolyte.
i) Why was the cup cleaned before electroplating? {1 mark}

ii) A current of 0.75 A was passed through the electrolyte for 1 hour 4 minutes. The mass of the
chromium deposited on the cup was 0.52 g.

I) Calculate the quantity of electricity used. {1 mark}

II) Calculate the charge on the chromium ion. {3 marks}

Dry hydrogen chloride gas was passed over heated magnesium ribbon as shown below. The gas produced was then passed through heated copper (II) oxide. 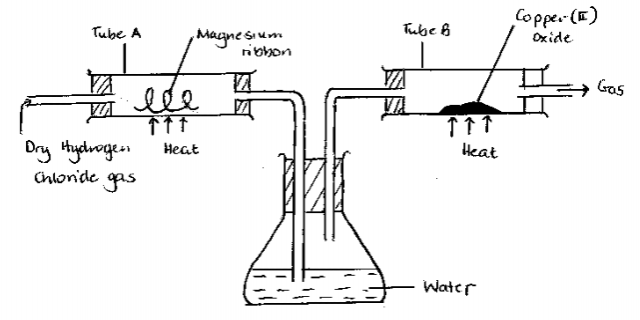 a) What is the function of the water in the flask? {1 mark}

b) Write chemical equations for the reactions that took place in the tubes A and B. {2 marks}
Tube A

Tube B
c) How would the total mass of tube B and its contents compare before and after the experiment?
Explain. {2 marks}

A student set up the apparatus shown below to investigate the effect of heat on a sample of zinc carbonate.

I) State the observations made in the test tubes when test tube A and B is heated strongly.
{2 marks}
A