Answer all questions in this section
1.

(i) Identify the recessive characteristic in the cross above (1 mark)

(b)Using the figures given above, work out the ratio of F2 plants with axial flowers to that of plants with terminal flowers (1 mark)

Illustrated below is a longitudinal section ofparts of two adjacent xylem cells, marked A and B. Study the illustration carefully and answer the questions that follow: 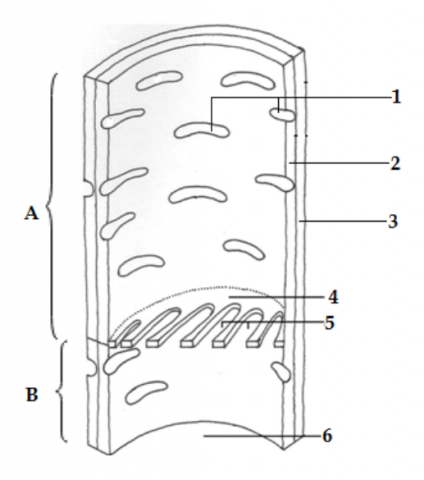 (d)How does the part labelled 6 adapt the xylem cells to their function? (2 marks)

In investigating a certain aspect of photosynthesis, two students at Starehe school set up the apparatus illustrated in the diagram below, using a potted Gallant soldier (Galinsoga parviflora) plant and which was growing in well-watered soil

The plant was first kept in darkness for 6 hours after which the experimental set up was exposed to sunlight for four hours. At the end of thistime period, the leaves labelled A and B were each tested for the presence of starch

(a)What was the aim of the experiment? (1 mark)

(b)Why was dry cotton wool rather than a rubber stopper used in the experiment? (1 mark)

(c)Why was the flask containing leaf A covered with black polythene paper? (1 mark)

(i) What results were obtained in testing the leaves for starch? (2 marks)

(a) Illustrated below are parts of two plant species A and B. Study the illustrations carefully and
answer the questions that follow

(ii)A student made cross sections of the roots of plant specimens A and Band observed these under a microscope. State two differences that the student would observe (2 marks)

(b)The diagram below illustrates the potassium ion (K+) concentration (in arbitrary units) in the cells around an open and a closed stoma of Tradescantia. Study the illustration carefully and answer the questions that follow

(ii)Aside from the potassium ion mechanism described in (b)(i) above, name one other theory used to explain the opening and closing of stomata (1 mark)

Carefully study the illustration of the parts of the gas exchange structures of a grasshopper shown below and answer the questions that follow:

(a)Identify and on the diagram, name the parts labelled W, X and Z (3 marks)

(b)Give one function of the structures labelled X (1 mark)

(d)Other than the hair-like structures, name one other structure found at the part labelled U
(1 mark)

(e)In what way is the gas exchange system in the diagram above more efficient than that found in mammals? (1 mark)

Answer question 6 (compulsory) and either question 7 or 8 in the spaces provided.
6.

(b)In an experiment at ICIPE- Kenya, the survival rate of pupae of two species of Tsetse fly- Glossina morsitans and Glossina palpalis was studied. In both species, the pupae develop buried underground in soil. The results of this experiment were as shown in the table below:

(ii)From the results of this experiment, deduce the respective habitats of the two species of Glossina

(iii)Explain your answers in (b)(ii) above

(iv)What results would have been obtained if the experiment had been carried out at a soil relative humidity of 90%? (2 marks)

(iv)What is the optimum soil humidity for survival of the pupa of the two species?
(2 marks)
G. morsitans