(Answer all the questions in this section)
1.

a) Describe what the diagram indicates in relation to the shape of the earth . (2 mks)

- An observer standing at the shore sees the smoke, funnel and mast before the rest of ship is visible . This indicates that the surface of the earth is curved. (2 mks)

i) Name one section of the earths crust (1mk)

ii) State two sources of information about the interior of the earth. (2 mks)

-Volcanic materials brought to the surface through eruptions.

-Drilling into the crut to the mantle to obtain materials.

(Answer question 6 and any two other questions in this section)
6. 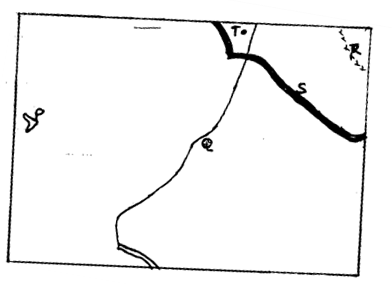 -The area has seasonal swamps/papyrus swamps

-The area has many permanent rivers

-Most rivers to the north east originate from the forest

-The water is superheated

-and turn into steam , under very high pressure

-The water under pressure jets to the surface through the cracks intermittently.

c) What are earthquakes? (2mks

-Energy release in the mantle : Radioactive explosion in the mantle may release excessive energy which results into shock waves thus shaking the earth’s crust

-Isostatic adjustment: The earth’s crust is lifted and subsides as it maintains equilibrium.These movements may trigger off minor earthquakes. Factor Explanation – 3 = (6mk