Answer all the questions
1.

(b)Differences between land reclamation in Kenya and Netherlands.

—Netherland, reclamation on large scale while in Kenya it is on small scale.

—Different methods of reclamation are adopted in the two countries.

(a Overpopulation-A situation whereby a region or country has such a high population that it cannot be supported fully due to strain on the available resources.

—Encourage family planning methods such as use of contraceptives.

—Control fertility by keeping girls over a long time in schools.

—Legislation on the maximum number of children a couple should bear e.g. like in China.

—Education to create awareness on the importance of having a small family size.

—Enables use of modern cargo handling machinery at the port.

— Containers take up little space in the ship as they are of standard size.

—Increase safety on goods while on transit, thus helping to reduce insurance premium.

—Easy transportation by road than rails.

—Different containers may be used for special goods such as drugs e.t.c.

(b) Measures being taken by government of Kenya to reduce road accidents.

—Use of safety belts by passengers vehicles.

—Use of speed governors.

—Construction of modern roads and filling of portholes.

—Legislation on a wide range of traffic requirements, such as examination of drivers eye sight while renewing driving licence.

—Human wildlife conflict resulting to loss of their animals.

—Pests and diseases affecting both the farmers and the animals.

—Remoteness making areas where they graze their animals inaccessible.

—Cattle rustling and tribal conflicts between crop farmers due to shortage of grazing land.

(a) Forms of pollution.

(b) Measures being taken to conserve major catchment areas in Kenya.

—Eviction of people from water towers e.g. like in main forests.

―Establishment and empowerment of organisation such as Neema, green belt movement.

―Education of people on the importance of conserving these catchments.

―Cutting down of trees such as Eucalyptus that consumes a lot of water.

Answer question 6 and any other two questions.
6. 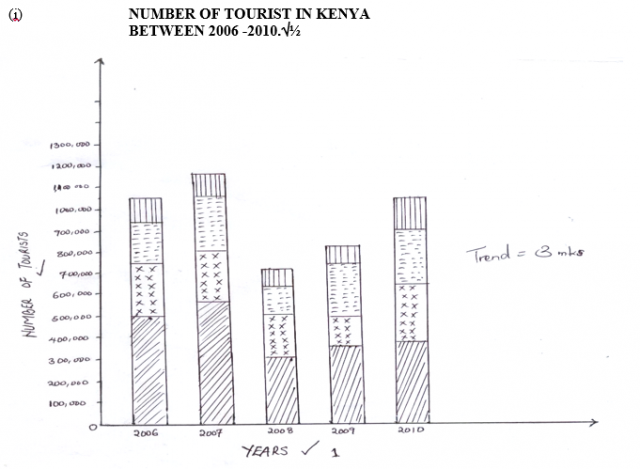 ―A sharp cecline in tourists arrivals during year2008.

(ii)Significance of tourism to the economy of Kenya.

―Source of revenue for the government.

―Promotion of international relations. NB No explanation no marks at all!Each well explained

―Improvement on security of tourists and on tourists attractions.

―Extensive mmarketing of Kenya as a tourist destruction in foreign nations.

This is the rearing of fish in pond.

(b) (i)Explain how the following factors influence fishing presence of ocean current.

―Cold current have conducive temperature for the growth of planktons which inturn encourage the flourishing of fish.

―Combine sheltered from strong winds and ocean currents have much fish.

―Indented coastline encourage deep sea fishing since they allow the anchorage of large vessels and development of ports.

(ii)Describe how the method is practised in L.Victoria. Fishing boats with the help of another boats.(Dry)spread out the same net in the lake.

―Net is held to some weights to keep it in water.

―The net is alfashed to the boat which surrounds a shoal of fish.

―The net is pulleed from both ends.

―The net is hauledd over and fish are emptied.

―The convergence of cold Oyasiwo in the warm Kuro Siwo current results in well oxygenated ice free and cool waters ideal for fishing through the year. ―A wide and long continental shelf which provide breeding ground for fishing.

―Highly intented coastline with many sheltered boys and island which provide breeding ground and fishing village for fish.
―Highly mountaneous Eastern,Russia,China and Japan have driven pple to the sea to seek for lively hood.

―High population in Japan and China which provided ready market for fishing industry.

―Advanced technology especially in Japan in shinny building and electronics.

―Cheap as it is free.

―Available in all parts of the world.

―Can be stored in batteries and used later at night.

―It’s production lessen the dependance on oil or coal.

―It is in exhaustible sources of energy.

(b)(i) A part from Olkaria name two potential areas in Kenya for the generation of Geothermal power.

(ii)State two factors that limit the exploitation of geothermal power in Kenya.

―Danger of land subsidence as tectonic fluids are withdrawn.

―It is less dangerous/less risky when transported.

―It has many useful by-products when refined in Kenya.

―It is easy to handle crude oil i.e many products.

―It contribute to industrial growth in Kenya.

―Constant supply of large volume of water to ensure continous generation of power.

―Hard basement rock to provide a firm foundation for the construction of a dam.

―Non-porous/impervious basement rock to prevent seapage of water from the reservoir.

(e)You intend to carry out a field study on sources and uses of energy within your school environment.

(iii)Give three problems you will encounter while collecting data.

―Inaccessibility in some areas.

(ii)Benefits of the Jua Kali sector.

―Has created job opportunities for the growing labour force.

―It uses locally available or recycled raw materials,thus it helps in conservation pf the environment.

―Produces relatively cheap products that are affordable to many.

―It operates at grassroot level,thus it uses locally available,simple skills.

―It requires little capital to establish,so many people are able to participate.

―It empowers people to intiate projects thus reducing reliance on the governments.

―Some of the products are exported thus earning income.

―It saves the country foreign exchange.

―Government may discourage the concentration of industries in one place for economic and political reasons.

―Government encourage equitable distribution of industries throughout the country to ensure development in the whole country.

―Decentralization of industries is done to open up the underdeveloped areas to rural-urban migration and reduce risksd in times of calamities.

―Some inustries may be set up in a particular place because of political reasons.

―Government may restrict development of industries in certain areas due to environmental reasons.

(ii)How presense of electricity influences the location of industries.

―Industries are located near urban centers where power is readly available.

―Although electric power can be transmitted over long diatances,industries are established where power is readly available

―Japan has a skilled and industrious workforce which enhances efficiency in production.

―Positive government policy on industrialization has led to its rapid development of electronic industries.

―Presence of large population which provides a large domestic market for electronic goods as wel as a large labour force in the factories.

―Advanced technology and resources have promoted efficient methods of production of highquality goods that compete favourable in the world market. ―Availability of adequate financial resources which have helped in the setting up and expansion of the industry.

―Inadequate capital which makes it difficult for industries to run smoothly and to expand.

―Inadequate raw materials that interrupt the operation of industries.

―Limited market for some communities which slows down production.

―Frequant breakdown of machines sometimes leads to shortage of production.

(a) (i)Arable farming. ―This is the cultivation and management of crops.

―At times prices of commodities grow on plantations fluctuate leading to uncertainity in the expected income.This discourages farmers from growing some crops.

―Sometimes the prices in the world market fail,leading to great lossess due to the dependence on one crop,this may make it difficult to meet the production costs.

(b) In adequate capital.

―There is stiff competition from other countries producing similar commodities,This has affected the developing countrires e.g. the coffee industry in Kenya.

―Horticultural crops are among the leading foreign exchange earners in Kenya.

―Horticultural sector employs many people improving their standards of living and reducing unemployment.

―Has led to the expansion and development of transport in areas where horticulture is practised.

―Has led to effective use of land which was idle.

―Has promoted the establishment of more industries e.g.fruit canning and manufacturing of vegetable oils.

―Farmers are also getting good income from the sale of their produce which improves their living standards.

―Horticultural farming has increased food supply in the country.

―Labour is required for field preparation,weeding,pruning and picking of tea leaves.

―Good roads are essential in the tea growing areas.

―Availability of capital to pay for labour and buying farm inputs.

(ii)Tea-growing areas to the west of the Rift Valley.

―Facilitates the collection of green leaves from the farmers.

―It establishes tea factories for the farmers.

―It sells seedlings to the tea farmers.

―Markets tea on behalf of the farmers.

―It is in charge of collection of payment from the buyers on behalf of farmers.

―The Kenya Tea Development Authority(KTDA)markets tea both nationally and internationally.

―Most of the tea is sold through the Mombasa Auction.

―Some of the tea is sold through electronic mail with payments being made in advance.