Answer ALL questions in this section n in the spaces provided
1.

(a). This is the phenotypic expression of a gene located on sex chromosomes of an individual.

(a) Platelets exposed to air ruptures on damaged tissues to release enzyme Thromboplastin/thrombokinase.Thromboplastin neutralizes an anti-clotting factor (heparin) in blood. It also activates blood protein prothrombin to thrombin in presence of calcium ions. Thrombin activates fibrinogen to fibrin which forms a meshwork on injured tissues that traps the red blood cells. It then dries up to form scab that stops bleeding.

(b). Blood clotting is the conversion of soluble blood proteins into a mass of tangled threads of insoluble protein while haemoagglutination is the clumping together of red blood cells.

(ii). -Numerous mitochondria in its wall cells to generate energy for active transport.

-Coiled/have microvilli to increase the surface area for absorption. Note: A student must score a(i) correct for him/her to score a(ii)

(b).-Some may be harmed during capture.

-The marks may have disappeared.

(c).i) Birds are evenly distributed in the woodland.

iii). No migration of birds into and out of the habitat during the study period.

iv). No death of marked animals. 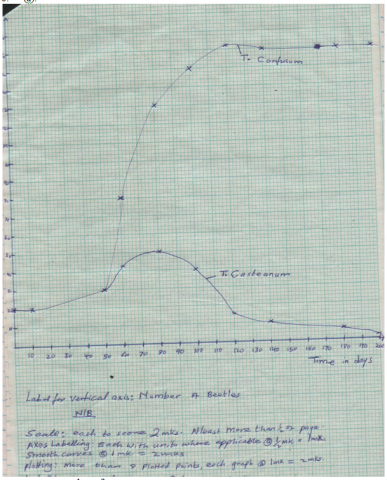 ii). 60-80 Exponential phase/rapid increase in population√ Many reproducing individuals; resources are not limiting organisms have fully adapted to the environment;

(d).i). Competitive exclusion being a weaker competitor for resources, T. casteanum was outcompeted by T. confusum which is a better competitor

Members of a given phylum show similarities such organisms have similar structures that perform similar functions. They also have structures that are adapted for different functions such as the pentadactyl limb of mammals, birds, fish etc. Such are called Homologous structures. Analogous structures have different embryonic origin but perform similar functions e.g. the wings of birds and insects. Vestigial organs are one which have been underdeveloped or missing due to a long period of disuse. They include the facial hair of humans appendix and tail of human beings.

Embryos of vertebrates show similarities at a particular stage in their life cycle. This points out to a common ancestor.

-There exists a similarity in terms of flora and fauna at the edges of continents. e.g the East Coast of South America and West Coast of Africa. -This shows that at one time there was a one uniform landmass but the continent split and moved apart in the continental drift.

-Thin to reduce the distance for Carbon (iv) oxide and light to reach the photosynthetic cells/palisade cells.

-Presence of stomata to enhance efficient movement of Carbon (iv) oxide and oxygen into and out of the leaf.

-Presence of guard cells which regulate the opening and closing of the stomata.

-Transparency of the cutide and epidermal cells for penetration of light into the palisade cells.

-The palisade cells contain numerous chloroplasts with chlorophyll for absorption of light.

-Palisade cells are located closer to the epidermis to receive maximum sunlight.

-Leaves have leaf veins that conduct water and mineral salts and products of photosynthesis.